You might be tired by finding the right Bash shell script to run more commands which are stored in a file. Here is the script which you are searching…

In this example going to use below commands in the file to execute using the script.

As next step, we are going to create a file with above commands assigned to a variable. If we are using this commands directly without assigning to a variable, the script will not execute the commands properly. Because of space(df -h) which we used in between commands will be taken as a separator by the script. So that only we are saving the commands in a variable.

Then create the script to run the commands which are stored in cmd.lst file

and now provide the execute permission using chmod command for both files.

Script working successfully. Thanks for reading the post and support. 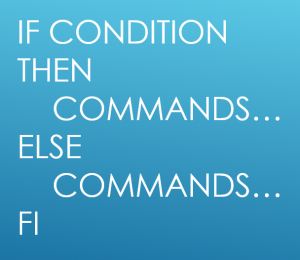 We are going to see if statement in bash shell scripting in Linux/UNIX environment.

If statement is playing the most important role in bash shell scripting and other programming languages. Its working based on condition and we can write another if statement inside of an if statement.

Syntax of If statement:

We have some operator which is useful in if statement conditions for validation. Below they are.

Then provide the execute permission to the script using chmod command.

Now will run the script by passing a parameter

Today we are going to see how to use if statement in bash shell scripting.

before going to work with if statement, we should know the options which will be used in if statement to compare conditions.

We are going to see a script with a simple if statement.

From the below script we are going to check given number is equal to 100 or not and using read command to get keyboard interaction while running the script.
It will read the number from our keyboard interaction and store it in a variable called number. Then will check for the condition, which we mentioned in if statement and display the string.

We can use elif, if we need to execute more than one statement for if condition.

For the same numeric value validation we are going to change use this elif  option.

Execute permission is must to run the script.

Using below command will add the execute permission to a file.

Now check using “ll” command whether the permission has been added or not.

We can use three methods to execute the bash shell script.

Here am writing script to display a string.
Echo command will do simple printing whatever we are giving with double quotes.

Now will write a script to display Current logged in user, date and Count of users logged in.
Use the vi editor to create script file.

type the below set off commands to create this script.

Save and exit from the file.

Now run the script and check for the output.

like above will create bash shell scripts for our requirements.
Will see some other examples in next post.